Soaring with APM and Ultimate LRS

Ultimate LRS provides fast telemetry and can be used with APM or any other flight controller.

I like to fly an EasyGlider and take advantage of the APM to detect and circle perfectly in thermals. As far as I know, it’s not a common way to use APM, and several users asked me to explain in more detail how this can be achieved :

I’m flying with an easyglider, with the APM in the cockpit, and the ULRS in the removable part of the cockpit (check this page for photos). The battery is inserted through a hole made in the bottom of the fuselage, in this way the cockpit is always closed even when changing batteries.

The advantage is that the cockpit is hermetically closed (with water resistant tape) because it allows to fly in all weathers.

The pitot tube of the airspeed sensor works fine even in rain : as the tube is very thin, the water drops can’t really go inside it.

Apart from this, it’s a completely normal easyglider. For thermal flight, I’m using a 4S 2200 mAh, even if a smaller battery would be better.

How to thermal with APM

The APM mode switch (3 ways) is set on FBWA-Cruise-RTL. No manual mode.

I launch in FBWA, and switch to RTL after a few seconds. When it’s at a certain altitude, I get in my car, close the door and turn on the air conditionned. It looks like a detail, but as thermal flights are usually done in spring / summer it can be excessively hot. Being in the car has many advantages : unlimited power supply, nice temperature, no wind, good readibility of the computer screen, large antenna on tripod on the roof, all required tools can be stored in it, ability to charge battery packs etc.

Then I check the parameters, especially the wind direction, power consumption, RSSI etc.

Routine checks but the few initial RTL circles give a good indication that everything is OK to go further. A bad antenna, a bad CG, a low battery, a strong wind, everything can be detected at this stage.

Wind direction and speed is important, because I’ll be looking for thermal in the direction opposite to the wind (so the plane will come back to the launch point when circling)

Then I’ll set an altitude target in Mission Planner of let’s say 400m. The plane is still in RTL, and simply goes up to 400 m.

The search for thermals

Then the thermal hunt can start, I switch to FBWA. Some trimming may be required to get to the plane to go straight, and the target pitch is adjusted (trims) to have a slow airspeed.

Gliders like to fly slow for thermals, but with APM it’s even possible to go too slow and still be stable, and that’s noticeable as the sink speed becomes too high when the airspeed is too low.

The sink speed indication in Mission Planner, and the audio vario are terrible. But it’s however possible to use them to find thermals.

So, the plane is at good altitude (it can even be very low like 10 meters, but the best thermals are higher), in FBWA, flies perfectly straight, and at a perfect airspeed.

Let it go against the wind, which is usually stronger at altitude. Try to travel above lakes, dark wood forests, and from time to time you’ll see that it starts to climb for a few seconds and if you don’t turn it will quickly come back to the normal sink rate.

These zones (thermals) are relatively spaced, for example every 200 or 300 meters on a straight line, and not all have the same lifting force. You can also encounter zones where the sink is stronger and that you should avoid (pitch down to go faster in these zones). You can play with flaps or flaperons to improve the sink rate, but I don’t do so. The normal sink rate of the EasyGlider is already perfect for thermalling.

Circling in the thermal

Then I choose one thermal, and I could use the roll stick to make a perfect circle as we’re still in FBWA. But I’m using a swtich on my transmitter, that’s mixed to the roll stick. So when using the switch, the plane will go to a precise predefined roll angle, for example 20°. This roll angle is determined on the RC transmitter : there’s a mix on the switch that determines which will be the target roll angle.

Take your time to determine by trial and error your best roll angle. If it’s too steep, the plane will have a high sink rate while circling. If it’s too low, the circle will be too large and can go outside of the thermal.

I didn’t thermal yet this year so I don’t remember the exact angle I used last year but it should be in the 15-35° range.

And if the PIDs are well tuned, you discover the extreme power of APM for gliders : the plane keeps perfectly its pitch, roll and airspeed at the same time, which is very difficult to do manually. It just makes perfect circles.

Then the thing is that in 90% of the cases, there’s more wind than uplift. That means that the thermal is more than 45° angled, and the consecutive circles in the thermal are non-concentric. But that’s not an issue, the plane stays in the thermal, it’s the thermal that very inclined. It’s important to keep that in mind because most flight simulators show the thermals as large vertical cylinders, but in reality they are very angled.

With APM you don’t have to worry about this, the plane is just perfectly circling in the air, even if the gps trajectory looks like a series of ‘eeeeeeee’.

So once I enter the thermal, let’s say the vario shows +2 m/s, I turn on the roll switch, the plane starts to circle and I check what happens. If the vario goes still higher, I go straight until it goes lower. It means that we’ve turned into the thermal center, and just have to wait to pass the center and see the vario decrease, at which point we start to turn again. After a few iterations (vario goes higher : start to circle, vario goes lower, go straight), and keeping an eye on the trajectory in mission planner, it starts to be intuitive when to circle or stop circling.

When looking at the flight path in mission planner, while looking at the vario, I can also say on a given circle : “OK, the lift is on north east of my current circle”, and adjust the next circle.

When the thermal is well centered, the plane can stay in circle mode for long periods without correction. Then a small correction is required from time to time, until the top of the thermal or the altitude limit is attained. Notice that all thermals have an upper limit, where they just fade, but normally you’ll fly lower.

If the initial circling was in the wrong direction, the vario does simply come back to its normal sink rate and after some exploration in the area it’s easy to locate the same thermal.

This method is very effective and is very simple to learn. Think how much it’s complex to do in a full size glider, without the APM help : you’ve got to keep an eye on the sink rate, roll rate, airspeed, while continuously correct the pitch, roll and yaw of the glider. At the same time trying to center the thermal, keeping in mind that a variation in the pitch can induce a false vario signal.

It’s more logical to let a flight controller take care of these 3 regulation loops, while just focusing on centering the thermal.

Even in Belgium, I’ve already found thermals up to 9m/s which is incredibly fast. Often the thermals are larger and stronger in altitude (until their limit), but they can start extremely low and that’s funny too because here there’s a lot of buzzards that come fly by and show where the lift is. 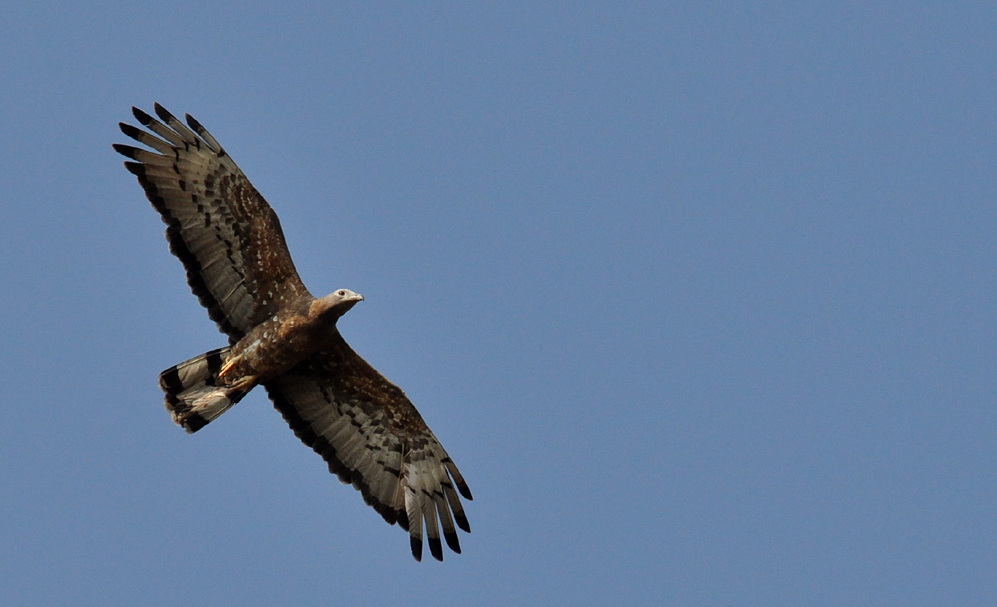 In some cases, I had the plane taken in a high wind, and going backwards. The reflex to have is to set an altitude target much lower rather than try to continue at altitude. Closer to the ground the wind is always considerably slower.

So that’s it. It’s also possible to fly FBWA for thermal hunt with a very low throttle just to compensate the altitude but I don’t find it as effective when looking for thermals.