As any other RF transmitter, the RFM23BP modules used in OrangeRX creates a certain amount of harmonics.

Harmonics are unwanted emissions on frequencies which are multiple of the main (fundamental) frequency. If the generated waveform was a perfect sinusoid, there would be no harmonics at all. The harmonics can be seen as a measurement of the signal distorsion in comparison the a perfect sinusoid.

The harmonics level is usually expressed in dBc, which is a measurement in comparison to the power of the fundamental frequency peak.

We can measure the harmonics by connecting the transmitter to a spectrum analyzer via a coaxial cable, and if necessary an attenuator of known value.

Here’s the measurement result for the RFM23BP module of an OrangeRX 1W TX : 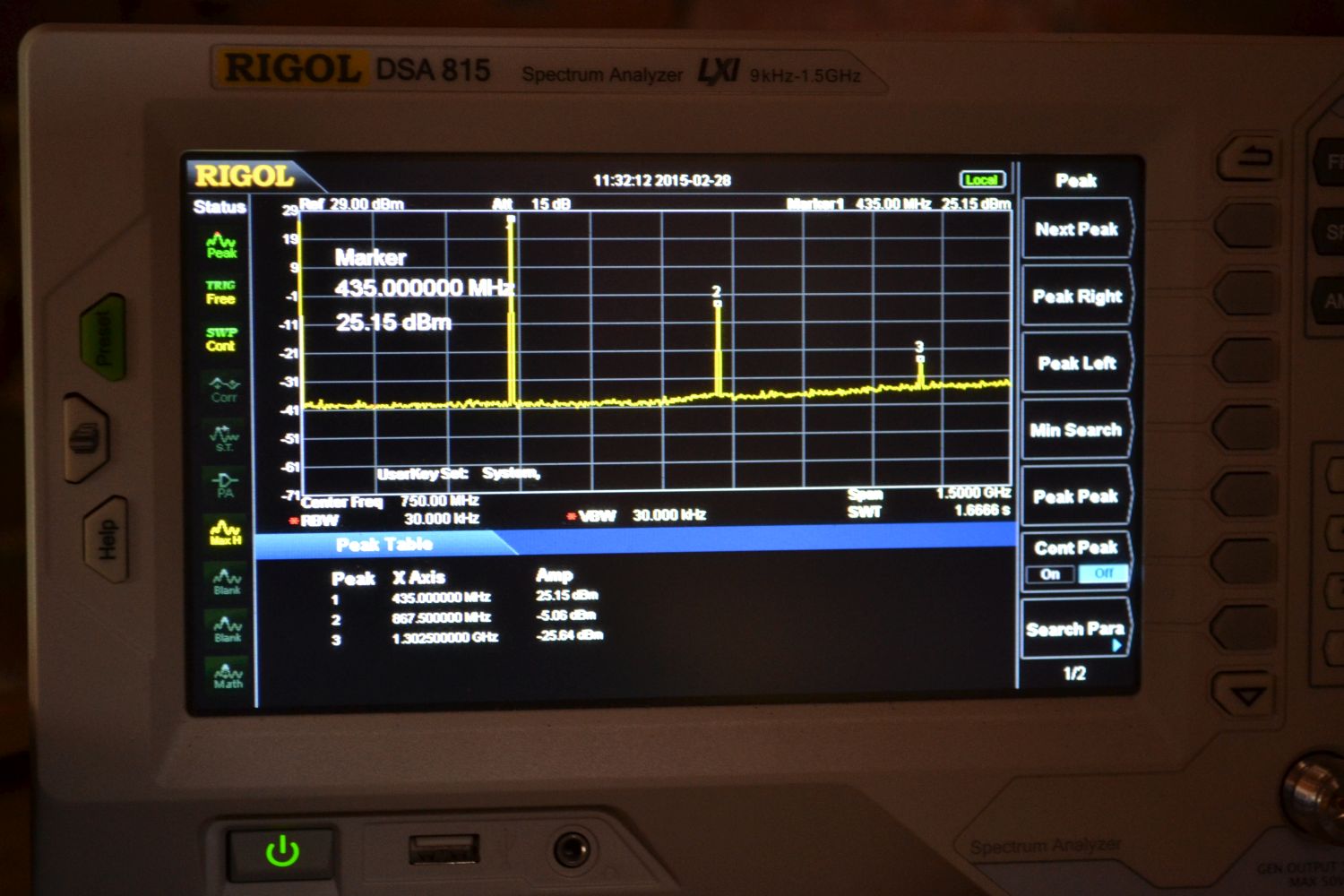 The ‘peak table’ at the bottom of the screen summarizes the peaks measurements.

The fundamental frequency is at 25.15 dBm. We can convert from dBm to mW and find 327 mW output power. This is not a surprize as we know the RFM23BP module is powered at 3.3V in the OrangeRX 1W TX, and doesn’t provide its full power.

Does this correspond to the module’s specifications ?

We can check the RFM23BP datasheet here :

The second harmonic is below 1Ghz, so we must have something smaller than -30 dBc, and we have -30.21 dBc, which is good.

The module is perfectly compliant to its specifications in regards to harmonics level.

Remark about dB, dBm and dBc :

Decibel (dB) is a way to express a ratio between two values. For example if value A is 100 times greater than value B, their ratio is 10 dB.

Why do we use dB ? We could express everything without using dB. However many formulas are expressed in a simplified way with dB : multiplications become simple additions when using dB : adding 10 dB = multiply by 10, adding 3 dB = multiply by 2, …

If you’re interested you can find more information here.

We’ll do the same measurements on another module : 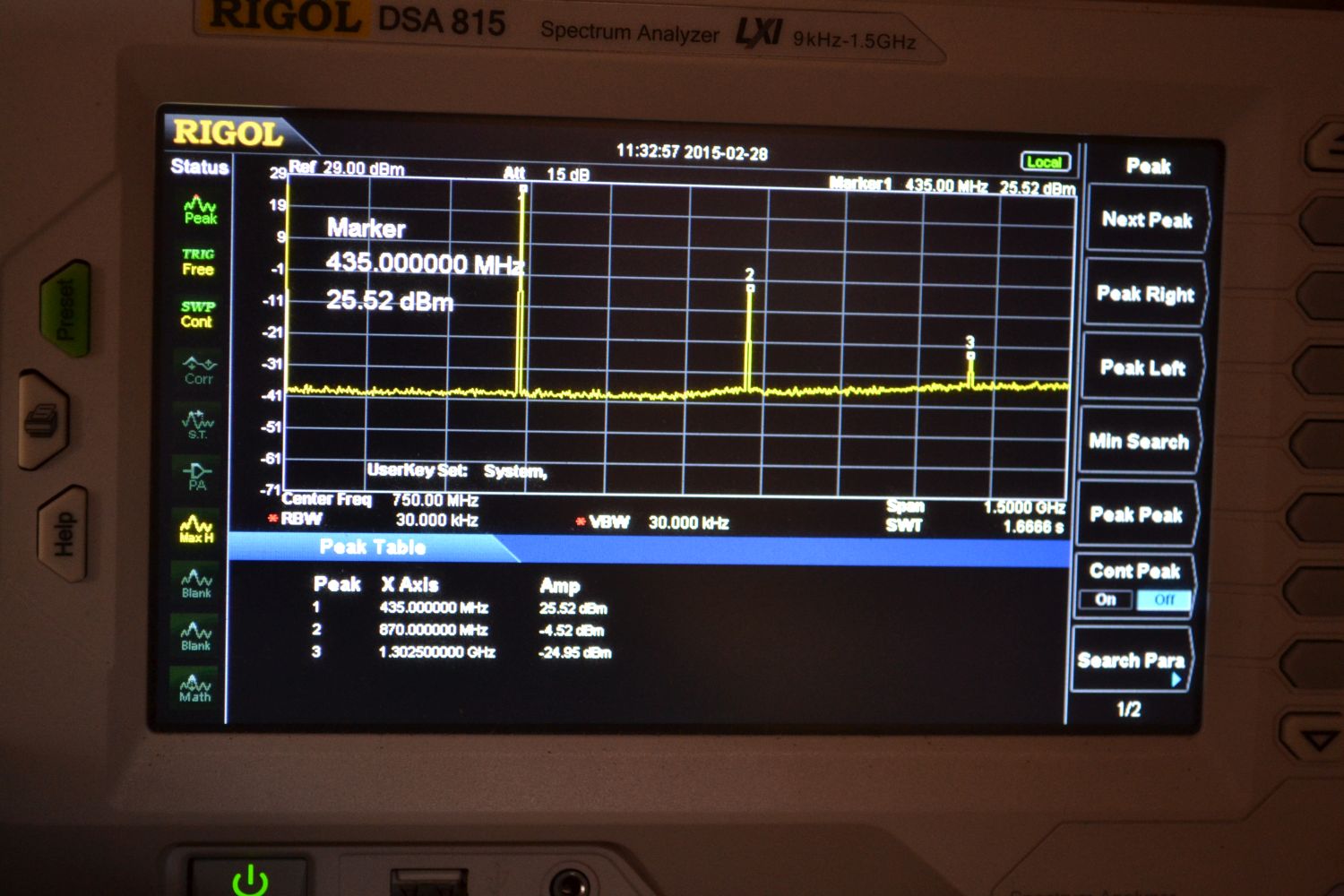 We have almost the same results :

Again, this module is compliant to its specifications.

We will now compare to another device using a RFM23BP module. The interesting fact about this device is that it contains a lowpass filter to reduce harmonics level.

Another difference is that it powers the RFM23BP at 5V rather than 3.3V. 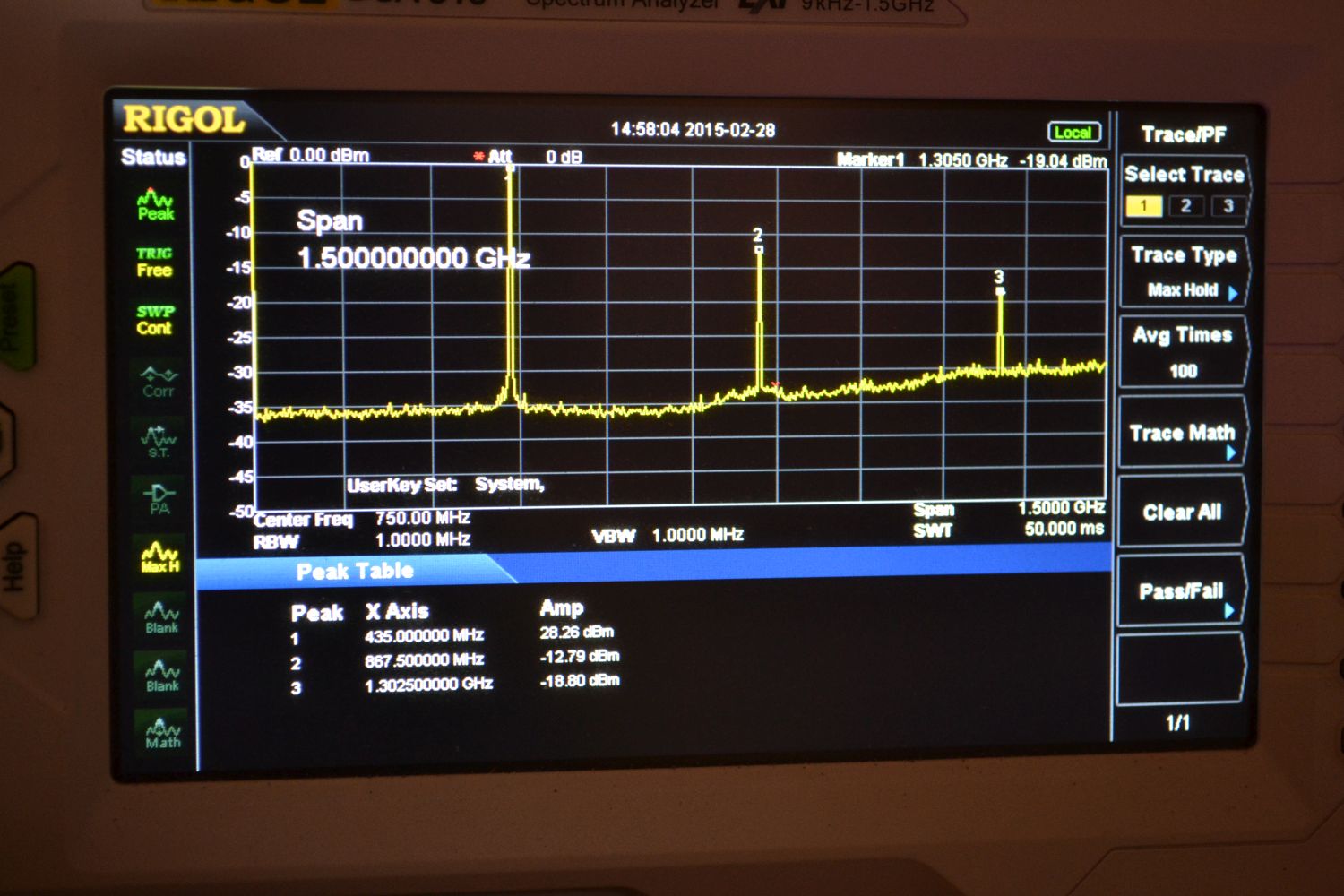 The third harmonic (1300 MHz) is at -18.80 dBm, or -47.06 dBc. This means that this device creates more interferences to 1.3 GHz video than the OrangeRX modules do. For this frequency, it doesn’t correspond to the lowpass filter’s specifications, so the exact cause has still to be determined (defective filter ?). However it was possible to confirm the measurement by testing the interference on a 1.3GHz video RX, and comparing with an OrangeRX module.